In addition to his oversight of the private brands' council and their efficiency-driven initiatives to encourage brand owner innovation, Doug also leads FMI’s CIO Technology Board, Asset Protection Council, and joint industry initiatives, SmartLabel and Information Accuracy. Prior to FMI, Doug began his career in the food retail industry in 1984 with Fry’s Food Stores. His 30+ years in food retail have included leadership roles at Fry’s (a division of Kroger), Kraft/Nabisco and Federated Foods with focuses on retail operations, consumer packaged goods and private brand development and marketing. 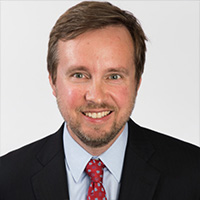 Christian Beckner is the senior director of retail technology and cybersecurity at the National Retail Federation. In this capacity, Beckner leads National Retail Federation’s CIO Council, Technology Leadership Council, IT Security Council, and cybersecurity program, including the NRF Cyber Risk Exchange. He is responsible for developing strategies, programs, and activities to maintain NRF as the technology leader and convener in the retail sector.

Prior to National Retail Federation, Beckner spent five years as deputy director of the George Washington University’s Center for Cyber and Homeland Security, a think tank where he focused on cybersecurity, counterterrorism, and homeland security. He was previously an associate staff director at the Senate Homeland Security and Governmental Affairs Committee, where he was responsible for the coordination of oversight and legislation on a broad range of homeland security and intelligence issues. He has worked on cybersecurity and homeland security issues for close to 20 years, including positions at IBM, the Center for Strategic and International Studies, and the O’Gara Company.

Originally from Washington, Beckner has a B.A. from Stanford University. He obtained his Master of Business Administration and Master of Science in Foreign Service from Georgetown University. 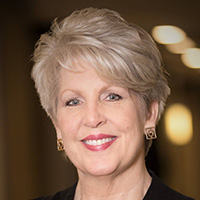 Vicki is a retail strategist, community builder, global executive, former COO and CIO in the retail industry. She has deep expertise in customer initiatives, operations, and technology, in addition to providing core industry level alliances.

Currently, she leads Vendors in Partnership LLC, with the mission of celebrating strong partnerships between retailers and the support ecosystem. She is also a managing board member of The Open Voice Network, an industry group dedicated to bringing the value of open, standards-based voice assistance to retail as voice reshapes consumer behavior.

Vicki’s prior work history includes serving as Retail Transformation Officer for Aptos, Inc., as the NRF’s Senior Vice President, Communities and Executive Director, Shop.org., where she provided strategic direction and management of Shop.org, the CIO Council, Digital Council, CMO Council, ARTS and Loss Prevention Council. Before joining NRF, Cantrell served as the COO of Tory During, as CIO of Giorgio Armani Corporation, and held positions of growing responsibility with Gucci Group, Party City and JCPenney. Rick Chavie is the former CEO of Enterworks. Prior to Enterworks, he served as SVP. Rick came to Enterworks after serving as SVP, Global Solution Management at Hybris & SAP’s Customer Engagement and Commerce group, where he brought together digital and physical commerce and CRM assets for seamless technology and customer experiences.

Chavie brought industry experience from his leadership roles at retailers such as The Home Depot and C&A, where he led transformation and growth programs and his executive role as the global marketing leader for NCR’s retail and hospitality business and partner roles at Deloitte and Accenture where he served clients across retail, branded consumer and wholesale verticals. Jeff is the founder of the Kellogg School of Management Leadership Forum and on the Board of Directors of the Kellogg Alumni Club. He is also is a Partner with Xforia Technology Solutions and an investor in several innovative technology platforms.

Over his 40 year career, he has rolled out new channels and products at large corporations (Pepsico, Mission Foods, Hershey’s) and growth companies (Mexican food, chilled fruits, foodservice equipment). He has worked with Technologies and Analytics as a Solution Provider for several large retail, restaurant, and transportation clients, introducing AI, Automation and Big Data platforms into their corporate workplaces. Jeff has an MBA from Northwestern Kellogg School of Management and a BA from Colgate University. 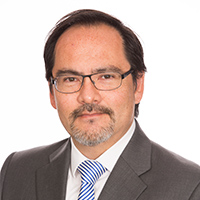 Mark Mathews is Vice President, Research Development and Industry Analysis, at the National Retail Federation. In this role, Mathews is responsible for helping to develop, evaluate, and direct the research initiatives for NRF’s Retail Research and Analysis Center.

Mathews has spent more than 20 years working in research in a variety of roles in the United States and the United Kingdom. Most recently, he headed the Market Intelligence Group at the World Gold Council, where he served as a member of the organization’s leadership team. Prior to working for the World Gold Council, Mathews spent seven years working for a $1.4 billion private equity firm based in London. As a Director in the firm, Mathews ran the team responsible for generating investment ideas and opportunities for the fund. For 12 years prior to that, Mathews worked for the NASDAQ Stock Market as Managing Director of Research and Head of Strategic Planning for NASDAQ’s international operations. He has also worked at Accenture, where he led the firm’s European capital markets research team.

Mathews is a Georgetown University graduate, where he was a double major in Finance and International Management. 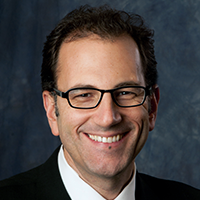 Jules serves as CEO of the Future of Privacy Forum, a Washington, D.C.-based think tank that seeks to advance responsible data practices. FPF is supported by the chief privacy officers of more than 110 leading companies, several foundations, as well as by an advisory board comprised of the country’s leading academics and advocates. Jules's previous roles have included serving as Chief Privacy Officer at AOL and DoubleClick, as Consumer Affairs Commissioner for New York City, as an elected New York State Legislator and as a congressional staffer.

Jules serves on the Advisory Board of the Center for Copyright Information. He has served on the boards of a number of privacy and consumer protection organizations including TRUSTe, the International Association of Privacy Professionals, and the Network Advertising Initiative. From 2011-2012, Jules served on the Department of Homeland Security Data Privacy and Integrity Advisory Committee. He is a regular speaker at privacy and technology events and has testified or presented before Congressional committees and the Federal Trade Commission. 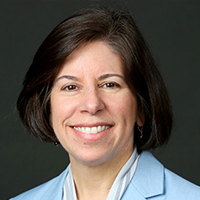 As the Executive Director of both AI for Business and Wharton Customer Analytics at the Wharton School, Mary Purk leads the academic research centers that focus on the development and application of cutting-edge AI and business analytics methods. Through “learning by doing” experiential programs, Ms. Purk connects companies with students, academics, and professionals across multiple industries to solve complex, real-world business challenges using machine learning, AI, and big data.

Ms. Purk is a proud MBA alumnus of the University of Chicago Booth and the University of Illinois Gies School of Business. She has designed and instructed executive education courses, presented at numerous conferences, and published papers in the Journal of Marketing and Journal of Retailing. 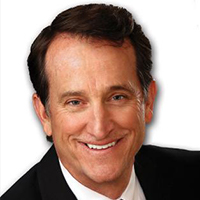 Patrick Spear is the President/CEO of Global Market Development Center (GMDC), an international trade association for GM and HBW connectivity, education and research. He joined the association in 2014, after nearly two decades of involvement with GMDC as a supplier member during his tenure with multiple CPG manufacturers.

Patrick has been active in the consumer and office products industry for over 25 years. Beginning his career with BIC Corporation, Patrick gained valuable insights and steady career advancement at BIC, and during his subsequent tenure with Newell Rubbermaid, Mapa Spontex, Identity Group, and Mammoth Office Products. His career experience spans the continuum, from retail sales representative (BIC) to CEO/Managing Director (Identity Group and Mammoth).

Born and raised near Pasadena, CA, Patrick holds BA degrees in Economics and Environmental Studies from the University of California at Santa Barbara, and an MBA degree from the University of San Diego. Patrick is also an Eagle Scout and a graduate of the Colorado Outward Bound School. He and his wife, Lisa, have three children. 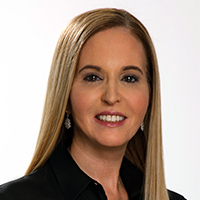 Deborah Weinswig is the CEO and Founder of Coresight Research, a provider of research and advisory services to retailers and investors. Coresight Research specializes in disruptive technologies reshaping today’s retail landscape and has a global presence spanning the US, Europe, and Asia, including deep expertise in the Chinese market. From 2014 to early 2018, Weinswig served as the founding Managing Director of Fung Global Retail and Technology (FGRT), the think tank for Fung Group. Previously, Weinswig was Managing Director and Head of the Global Staples & Consumer Discretionary team at Citi Research.

Weinswig was ranked #1 Analyst by Institutional Investor for 10 years in a row. She was named one of the Top 50 Retail Influencers by Vend in both 2016 and 2017 and received the Asia Retail Congress Retail Leadership Award in 2016. She was recognized by LinkedIn as a top Voice in Retail in 2017 and 2018.

Weinswig serves on the board of directors for Goodwill Industries New York/New Jersey, GUESS?, Inc., Kiabi, Street Soccer USA and Xcel Brands, Inc. She is on the advisory board of the World Retail Congress and Retail Analytics Council. She advises companies such as EnterWorks, Fashwire, Nanopay, RetailNext, Rubin Singer, Smartzer and Trivver. She mentors through several accelerators, including Alchemist Accelerator, The Cage (powered by The Lane Crawford Joyce Group), Entrepreneurs Roundtable Accelerator, Grand Central Tech, New York Fashion Tech Lab, Plug and Play, Revtech Ventures, Techstars, TrueStart (UK) and XRC Labs.
Weinswig is a Certified Public Accountant and holds an MBA from the University of Chicago.

Retail Analytics Council, an initiative between Northwestern University and the Platt Retail Institute, is the leading organization focused on the study of consumer shopping behavior across retail platforms and the impact of technology.

The Retail Analytics Council (RAC) is the leading organization focused on the study of consumer shopping behavior across retail platforms and the impact of technology. Established in August 2014, RAC is an initiative between the Medill School of Journalism, Media, Integrated Marketing Communications and the McCormick School of Engineering, Computer Science Department.